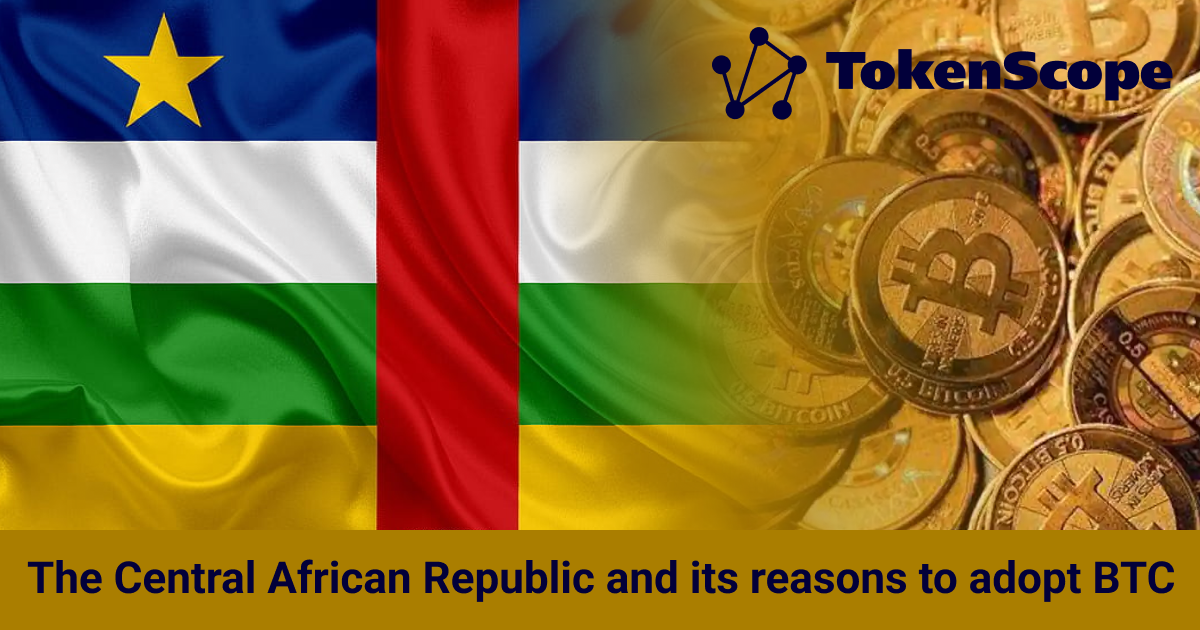 We already wrote about El Salvador which was the first country to adopt bitcoin as a national currency. The Central African Republic became the second one in this row of bitcoin’s adoption pioneers. The presidency of the CAR announced the country would adopt bitcoin on April 27 this year. We are going to research why this had happened to this particular country and analyze the consequences of this decision.

Unfortunately, the CAR is one of the poorest countries in the world, ranking 188th in the UN’s 2021 Human Development Index ranking, with GDP per capita of less than $1000. The mineral-rich nation struggled this situation complicated by a long-lasting civil war which has devastated much of the country. The government even had to recruit mercenaries to help in its fight against rebels. Now it seems that technological barriers to widespread bitcoin use are immense.

Bitcoin as all cryptocurrencies is based on a shared ledger across a global network of computers and relies on fast internet and widespread access to computers or smartphones. In the CAR internet penetration according to Datereportal stood in 14% in 2021 while only 14% of the population has access to electricity, mainly in the capital of the country, and access is almost entirely absent in rural areas.

Same as El Salvador the CAR does not have its own national currency. The CFA franc, established by France as a colonial currency in 1945, continues to be used both by the countries of Economic and Monetary Community of Central Africa (CEMAC) and eight independent states in West Africa grouped in the West African Economic and Monetary Union (UEMOA).

The CFA franc, which is pegged to the Euro and whose convertibility is guaranteed by the French Treasury provides some kind of macroeconomic stability and low inflation to the countries that use it. However, some people in the region think that the CFA frank’s dependency on France’s monetary system is a neo-colonial patronage. France still has a great influence on its former colonies, whose monetary policies far from being independent. We already wrote, that Bank of Central African States (BCAS) that emits the CFA frank had announced the possibility to develop its own digital currency for use among six member states. That’s why the CAR’s decision to adopt bitcoin seemed quite contradictory and even conflicting to regional monetary policy.

Just after the CAR’s bitcoin adoption announcement the BCAS issued a statement declaring the CAR’s adoption of the new cryptocurrency law “null and void” and in violation of the tenets of the regional group. In the letter addressed to the CAR Finance Minister Hervé Ndoba, governor of the BCAS Abbas Mahamat Tolli describes the “substantial negative impact” that the CAR adopting crypto will have on the monetary union of Central Africa. There is no surprise that The International Monetary Fund (IMF) called the decision concerning as well.

Excessive volatility in bitcoin may transfer into fluctuations in country’s economy, consumption and household wealth. We remember as El Salvador, which has a huge external debt as much as $1 billion had purchased the majority of bitcoin for a price of $58 000 per coin. In this connection it seems probable that such experiments with cryptocurrencies on the state’s level among poorest countries may lead to unpredictable consequences in their economies.

The CAR, in addition to its bitcoin adoption, decided to launch national cryptocurrency Sango Coin, which also should be recognized as an official means of payment. According to the CAR’s president, Sango Coin will be provided with the natural resources of the Central African Republic - diamonds and oil. Apparently due to a weak roadshow or due to overall situation in the country’s economy sales of the Sango Coin got a lukewarm response as Bloomberg noticed.

By the end of the first day of the Coin’s offering buyers had bought just $1.2 million of $21 million worth of coins for sale by the Central African Republic since Monday. By present time according to the project’s official website the situation has not has changed much.

It is notable, that on 26th of July the CAR suddenly froze the application of its law adopting bitcoin as an official currency until the BCAS issues regulations for cryptocurrency throughout the Central African Economic and Monetary Community (CEMAC). If initially there were talks of some kind of a misunderstanding and even conflict between the country and the Bank, now the CAR requests assistance in creating a national regulatory framework for digital assets. With such a request, the CAR may demonstrate its readiness to end the confrontation that began with the announcement of Bitcoin as a national currency on a par with the CFA franc.

Alongside with the modest interest in the Sango Coin among investors and continuing of “crypto winter” probably the country’s authorities decided to hold the initiative to further asses all probable risks and not to make nervous financial watchdogs. It also could be that the initiative was only some kind of marketing trick to attract attention to the Sango Coin’s offering or even a political game.

But if the experiment were going to work the same as in El Salvador and more countries explore the official adoption of bitcoin, it could add credibility to the digital currency, as bitcoin adoption has now moved far beyond a niche community of traders and businesses.

The TokenScope Team continues to further monitor all the most important and interesting changes in crypto regulation and provides a comprehensive and prompt overview.